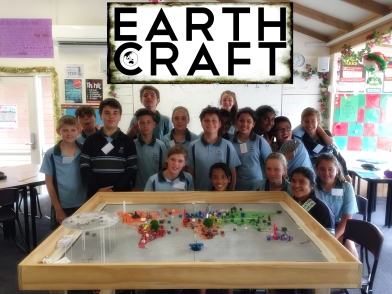 EarthCraft is an international political simulation game that gives students an opportunity to control the world and try and deal with an overwhelmingly large number of realistic “Earth Challenges”. It was designed with Year 6 students in mind but it could easily be played by students of any age from about 11 years old and up.

Here’s a short documentary that shows what the game is all about:

Here are all the documents used in creating and playing the game…. In no particular order!

The main rulebook, in kid-friendly language:

A two-page simplified version of the manual:

The team files, that have all the Earth Challenges:

We don’t assess the game, but you could, using this:

Here are the “Chance Event” cards. Each player takes one of these at the end of their turn:

For the original version of the game, I hand painted the map. Then I got clever and got this MASSIVE map file printed and laminated (but any world map will do):

Here is the PowerPoint I use with the kids to introduce the game:

Just for something to do I made a list of all the Earth Challenges in the whole game:

I make a piece to represent each challenge and again, for kicks, I decided to make a short video showing all the pieces used for Earth Challenges:

After the game I get students to vote anonymously for who they think who played the game the best. The winner gets this certificate (You might want to take my school’s logo off the certificate first!):

I don’t normally teach the kids I play EarthCraft with – which is a real downside – it would be WAY better to play this game with students you teach outside of the game. Anyways, because of that, I record their roles on this document so I can remember who is what:

Here is my main planning document spreadsheet. When I make games like this I plan it out using a spreadsheet. I find it easier to make sure every angle is covered that way. I don’t expect this file to be comprehensible to everyone! I’m adding it here in the off chance it helps others find a way to develop their own games like this.

If you are going to try and play this game (or any game) in school, you will probably need to convince a curriculum person it is relevant to what the law says we must teach. Trust me, it is fairly easy with the overly long curricula we have, and all the various priorities and capabilities, to draw up a fairly impressive list of curriculum links to pretty much anything. Here I have done it for the Australian and Victorian curricula:

These are all forms that students use in the game:

Here are a bunch of A3 posters I laminate and stick up around the room. Well, the Fates do that actually… (I try and get the Fates to do pretty much everything)

This is what the original version looked like, that we were playing in 2015:

New map and pretty much all the pieces have been upgraded. Originally all military units were just blocks of wood (because cheap and easy to source). I have slowly bought real pieces – mostly from discount stores and from eBay (Hong Kong!). And 3D printed stuff, and constantly rummaging through op shops. Always buy random toys! You never know when you’ll need them for a game. I also have a couple of tubs of random objects, lego, etc. for kids to use when they are inventing stuff…

Here are the banknotes:

Here are the continent populations. I update these every time we play:

Here are images for some of the pieces:

And here are some files to put headings on box lids and the whiteboard:

To get the STL files for the pieces, just do a search on this website:

If you need anything else, drop me a line!